If you have not hunted the tidal waters of the Atlantic coast, chances are you have never encountered Atlantic Brant. Brant seldom if ever going ashore during the winter months. They feed and roost in the saltwater tidal bays along the Atlantic coast. They are seldom found in brackish water and I have never seen or heard of them being found in fresh water.

Their diet consists solely of saltwater aquatic vegetation. The two main food sources are eelgrass and kelp. Eelgrass is about the size of a piece of linguini. It is brown and green in color and floats on the surface. Drifting throughout the bays with the tides and currents, eelgrass often gathers in large matts in coves, and along the banks of the marsh. Kelp, also known as "Brant Salad"is a leafy green vegetation which ranges in size from a couple inches in width to pieces larger than two feet in diameter. Brant salad drifts around the bays beneath the surface. Tides, currents and winds wash it across sandbars and flats. These coves, flats and sandbars are where thousands of Brant gather to feed. Unlike that of their larger relatives the Canada and Snowgeese, which rely on the annual crop growth in the fields, the Brants food source is replenished on a daily basis by the tides. Brant relocate throughout the bay as the tide changes, in search of their preferred water depth. This depth can range from just a few inches to over a foot deep. They feed like Dabblers, seldom if ever diving for their food. 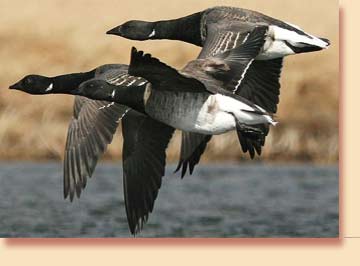 Typically the entire flock changes location at about the same time. This massive flock breaks up into smaller groups which travel in waves of usually fifty birds or less. Flying like giant Teal, shifting and turning they follow the banks of the bays, narrows and ocean beaches. They seldom fly over any large land mass. At high tide they are most often found in the back bays. At low tide they move out near the inlets to the ocean.The Brant's usual wintering grounds stretch from the Southern New Jersey shore, south to North Carolinia's Outer Banks. Virginia's Eastern Shore is located in the middle of these wintering grounds. The vast unspoiled marshes and numerous shallow bays in and around Chincoteague offer prime habitat for Atlantic Brant.

Brant are one of the most vocal waterfowl in the area, seldom quiet in flight or at rest. As with most seaducks and divers, Brant have little natural fear of humans. They decoy well and will often return two or three times to the spread after being shot at. This apparent fondness of being shot combined with their predictability and the huge numbers of brant in the area lead many hunters to think Brant are a sure thing. They are not. The same forces that replenish the Brants food supply can change its location. Wind, tides, currents, ice and coastal storms can move the eelgrass and brant salad miles from where the brant had been feeding. If the location of their food changes, so does their flight path. Prolonged, severe temperatures can push the birds further north or south. Unusually high or low tides and other factors can change the Brants habits and location. Building a Brant blind can be a major undertaking. They are most often pole blinds, built out in the open water of the flats and sand bars, so it is not easy to adjust to unexpected changes in the Brants flight path. Also, even the most understanding Brant eventually gets tired of being shot at, so you have to be careful not to over hunt your blinds. And don't forget that inherent problem that we have with all waterfowl, you still have to hit'em. 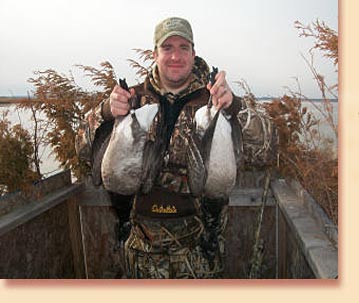 Brant are one of the first birds to arrive on Virginia's Eastern Shore and one of the last to migrate north so they are available throughout the hunting season. Along with Bufflehead, Greater Snowgeese and Blackduck, Brant are one of the most plentiful waterfowl on the east coast.

The Brants food quantity, as with all game depends much on what they eat and how they are kept. They are most desirable when they are feeding on eelgrass. If they have been eating brant salad you may have to add more garlic. Brant are typically breasted, not plucked and this should be done a.s.a.p. The recommended shot size for Brant is #4 Hevi-shot or #2 Hevi-METAL. Although they are geese, Brant are about the same size as the average Blackduck. They are easy to recognize with their sharp pointed wings and erratic flight. They are jet black from their head to and including their breast, with a contrasting white rear end. The white slashes on their neck are not noticeable at a long distance. They make enough noise to wake a normal person from a sound sleep and are found in areas not typically used by most other birds. The most common mistake made by brant hunters is flock shooting. This can result in that distant look on the hunters face as he watches the birds depart after unloading on 50 decoying birds at 20 yards. But more often than not there will be too many birds lying in the decoys, and you know how sensitive the federal guys are about that.