I was going to start by saying that there is little known about Rail, but that would be an exaggeration. The most common Rail on the Virginia Eastern Shore is the Clapper, referred to as Marsh Hens by the locals. Clapper Rail can be found in any of the saltwater marsh on both the seaside and Chesapeake side of the Delmarva Peninsula. We also have Sora Rail, but not nearly in the numbers of the Clapper. The Sora is a much smaller bird and prefers more brackish water.

There have been studies made and books written on Rail. Rather than dispute their findings, I will just share my opinions based on my experience. Rail are listed as migratory waterfowl. They are fowl and they do hang out around the water, they do not have webbed feet. Rail may migrate, but if they do they will have to pay the toll at they Bay Bridge Tunnel because they neither have the ability to fly or swim across the Chesapeake Bay. Every year in September we inspire them to make their southern migration by unloading #6 steel shot on their rear end. If I'm heading south for the winter, I'm leaving when people start shooting at me. When flushed, they will fly about 100 yards and land. Clapper Rails ability to fly is limited to under 300 yards, their ability to swim is much less. If they are swimming they do not have the ability to take flight, unless there is something floating that they can help themselves out of the water with, as I said they don't have webbed feet to lift themselves out of the water. Because no one has ever seen them migrate it has been rumored that they migrate at night, no they don't. Although you don't see nearly the number of Rail in the late season as in the summer, I have chased Marsh Hens out of duck blinds in January. If we get a severe fall storm, such as a hurricane, hundreds of dead Rail will wash up on the mainland shore, due to drowning. If they were able to swim or fly a half mile to high ground, I'm pretty sure they would do it. 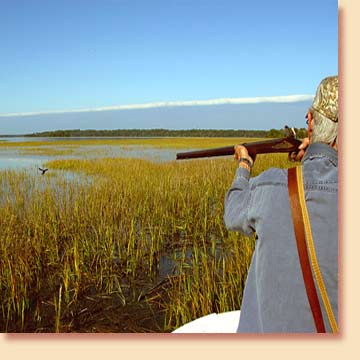 Enough about that, now how to hunt them. Rail hunting is done at or about high tide. The higher the tide, the more successful the hunt. Rails first choice to avoid being captured is to run, second choice is to hide, third to swim and the last choice is to fly. The marsh grass closest to the water, grows further apart and taller than the thick grass up on the marsh. At low tide the Marsh Hens will use the cover of that grass to either run behind you or stay far ahead of you. As the tide rises and water floods the tall wide spread grass, the Rail are forced into the shorter and thicker grass further up on the marsh. This restricts their ability to run, they are now left with 3 options. Close to half of the Rail that hide and then decide to takeoff, will flush behind you. If they flush from up on the marsh, they will typically tower 6 to 8 feet. They will either fly directly away from you, or if there is a creek 100 feet wide or less, they will try to fly across the creek. If they flush close to the water, they stay low and try to make it across the creek or fly up the bank and land in front of you. The best way to hunt them during a normal high tide is to walk the bank of a 20 to 50 foot wide creek, that ends at a point and try to drive them to the point. Your best shots will be birds trying to fly across the creek.

When you get to the point at the end of your drive, work that area hard and wait. There will most often be birds there and they often take minutes to decide to swim or fly. You should not be “stalking” birds, you should be driving them. Walk at a brisk pace in a sig sag pattern. 2 to 3 people will raise more birds than a single hunter. If hunting with more than one person, the ones further from the bank should be ahead of the person working the shore line. If hunting with 3, the furthest one from the water should be ahead of the other two. If you are hunting 4 or more, work both sides of the creek. 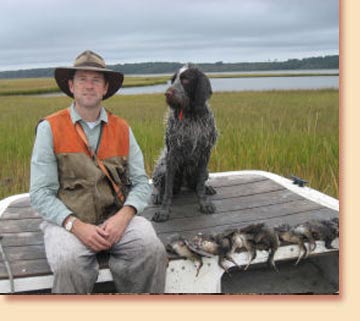 If you are able to hunt a extremely high tide, you are able to just hunt the high ground. These tides typically occur during the full or new moon and a Northeaster. The moon phase is predictable, the wind isn't. Rain is not helpful. Lunar tides are available on-line, tides are available at saltwatertides.com. The “Traditional method” for hunting Rail is done by poling a shallow draft boat over the flooded marsh, during a extremely high tide. Many, if not most of the birds taken by that method are swimmers. You will no doubt be confronted with the decision as whether or not to shoot a swimming bird during your hunt. Somethings to consider, chances are it's not going to fly, they are very good to eat and is anyone looking? It takes 3 Clapper Rail to make a meal. The drumsticks have just as much meat as the breasts.

If you are flushing birds it is very important to dress correctly! You will need shoes that shed water (the higher the top the better), gym socks, long pants that go down over the tops of your shoes. If you don't do this you will be unable to walk, because your shoes will fill up with snails. Don't wear boots or waders! Yes, you are going to get wet.

Non-toxic shot is required, the smaller the shot size the better. When your bird falls, don't take your eyes off the spot. Even dead Rail are extremely hard to find in the marsh. Be sure to bring something to carry your birds with. The Rail season opens on September 9th and runs through November 17th, the earlier in the season that you hunt the better. You are allowed 15 Clapper/King and 25 Sora/Virginia. 2016 has been an excellent breeding year for Rail. If you want to add other possibilities to your hunt, Teal season opens on September 21st and runs through 30th. Resident Canada goose is open from September 1st through the 25th.