The tidal waters of the Atlantic Ocean are a formidable challenge to any retriever.

Some of those challenges include currents, tides, temperatures, marsh grass, mud, oyster rock and salt water. The tidal flow through the narrows of the marsh and wetlands can be far stronger than the most able swimmer. The sharp edges of the marsh grass will quickly cut the webbing between the toes. Carrying a bird across 100 yards of chest deep mud flats will certainly test their stamina. And then there is the salt water. The first problem is that if they get in it, they are going to drink it. When they drink it, it’s going to come out....soon! When it comes out, it comes out at the extreme rear end of the dog. So make sure you are not in that area, or even worse, the dog is not in the vehicle at the time. If it happens in the boat, it’s not too bad because it’s nearly straight salt water and can be easily bailed out. Salt water gets colder than fresh water. This lower temperature is not the only problem. When the salt water does freeze, it does so differently than fresh water. Unlike a fresh water pond that freezes fairly uniformly all the way across. Salt water typically has large open waters with deep slush ice around the holes and banks.

This type of ice can make it difficult for your dog to either get back to shore or back up on the ice, the challenge of the salt water alone will stop nearly half of the retrievers from going the second time. If they are not accustomed to it. This is no indication of poor training or the dogs ability, it’s just a radical unexpected change.

One of the most serious conditions existing through the midatlantic states is oyster rock. These oyster shells are similar to walking over broken glass, and should definitely be avoided.

The good news is all these problems can be overcome.The first thing to do is acclimate your dog to salt water in mild weather. This can be as simple as throwing a stick into the bay in the summer months. If you are not close enough to the shore to make a trip or two before the season, schedule your first hunt in the early part of the season. Typically water temps. remain relatively warm into mid December. It is still important to acclimate your dog to the salt water before the hunt. This can be done the day before the hunt or even the morning of the hunt. In any case, make sure they are able to test the water before the retrieve. 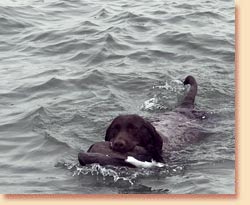 Local knowledge is a must when hunting the tidal bays. With a 3 to 4 foot rise and fall of the tide, what was nice open water at sunrise, can become a mud flat or piece of oyster rock by 9 am. The safest areas to work your dog are tidal marsh ponds or from a boat or poll blind in open water. The most you will encounter when hunting the ponds is low marsh grass on your way to the blind. Any cuts occurring during this walk, will be very minor. These marsh ponds are seldom more than one foot deep and although they typically have a soft bottom, there is enough water to keep your dog from getting bogged down in the mud. Some of the best action occurs out in the open bay. You will need a poll blind, floating blind or boat to hunt these waters. A pole blind is usually the most desirable because it is a stationary platform. It doesn’t rock with the waves or shift location with the tide, but you will need a dog platform to compensate for the rise and fall of the tide. Floating blinds can be very dog friendly. If designed correctly, the deck of the blind should be at or near water level when you move to that side to recover your dog. When hunting a well constructed floating blind you should not experience any erratic motion when moving around in the blind or from moderate sea conditions. Floating blinds also give you the mobility that stationary pole blinds do not afford. The down side to floating blinds are that they shift with the tide or wind which can cause frequent resetting of your decoys. They can also become somewhat unstable in rough weather.

Hunting from a boat gives you the greatest flexibility as far as location, but there are a few problems that can occur. The open waters of the bays and sounds of the Atlantic Coast are seldom calm during the winter months. Hunting from a rocking boat for a duck that is hard to hit under ideal conditions can be challenging to say the least. More often than not, it will result in that puzzled and frustrated look on your dogs face as you try explain why you missed the last dozen shots. Another problem that occurs with the wind, currents and changing tides is drifting too far away from your spread, or being pushed into the middle of your decoys. If and when you do get positioned right, a cripple will force you to pick up and go through the whole process again.

The easiest way to hunt the area is from the bank. If you have found the right area and the right tide, you have the possibility of divers, puddlers, brant, mergansers, geese and possibly seaducks all from the same location. But to do this, you must have local knowledge. If you have chosen an area with oyster rock under the surface, the hunt will be over after the first retrieve. If the area has a soft bottom, when the tide falls it may become a mud flat. I have seen dogs go out 2 to 3 hundred yards after cripples or birds caught in the wind and tide. Mud flats are not a retrieve that you want to put an older dog or one that is out of shape through. Make absolutely sure you know what’s under the surface before you send your dog.

All this is not intended to discourage you from using your dog on the coast, but to point out this area is far different than hunting a mill pond or flooded timber. One of the most asked questions I get is, “what breed do you think is best suited to the area?” A direct answer to that question would no doubt offend thousands of proud owners and I don’t believe there is a simple answer to the question. I can tell you that my partner “Tugboat” is a Chesapeake Bay Retriever. I can also tell you that Tugboat will go. If it’s cold, rough, and/or windy he’ll go. In general, the Chesapeake Bay Retrievers swimming ability and stamina are second to none. While I’m building blinds in the fall, Tugboat will become bored and swim out into the bay often for hours at a time. I have no idea how long he can swim, but I have never seen him quit. 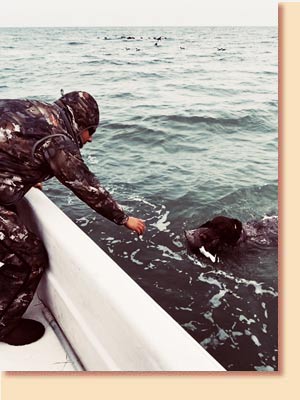 A few years back, I had a group of hunters that had showed up with a small female black Lab. They had requested allot of shooting, so I asked if it was more important to use the dog or get allot of shooting. They all said “shooting” they didn’t care about using the dog. We headed out to a pole blind for divers and seaducks. These blinds are constructed about 5 feet above of the water at low tide with 4 foot sides, so using a dog from these blinds just won’t work. After getting the hunters set up in the blind and the spread set out, I stood off in the boat about a half mile from the blind and waited on the radio for a call to pick up birds or chase cripples. After hearing volley after volley of shotgun blasts, I pulled closer to the blind. I thought no-one can do that much shooting without hitting something. I watched an oldsquaw come in, everyone in the blind unloaded. This was followed shortly by a black projectile being launched over the top of the blind. If you add the height of the blind to the flight pattern, you are dealing with a splash down of about eight to ten feet from the point of launch. I was amazed to find that instead of trying to head for shore, she actually returned to the blind, at which point one person would hold on to the other persons legs as they grabbed the dog and handed her back up into the blind. I sailed up to the blind to suggest rather than killing the dog, we could change locations or I could retrieve the birds as originally planned.

When I tied up to the blind and opened the door to discuss our options, I realized there was not only no problem with the dog, but the lull in the action caused by me coming to the blind was making her anxious. I have never seen a dog so ready in my life. I returned back to my original location, and with the exception of a few cripples, I wasn’t needed all day. I can say without exception, that female lab was the toughest retriever I have ever seen.

Last year we had a television crew bring a German Shorthair Pointer on a diver hunt. Although pointing for divers just didn’t seem to be practical and that type of dog in the cold January waters wouldn’t work, sometimes it’s just better to keep your mouth shut. On film, we have footage of this field dog chasing down and retrieving a crippled Canada Goose in the frigid bay waters and out swimming a crippled bufflehead in the coldest weather of the season. The type of breed helps, training helps, but nothing is more important than desire.

When you buy a dog from a reputable breeder, they often give you a money back guarantee. For most of us, this is meaningless. Once you bond with your partner, we tend to over look their short comings as we do with many of our human hunting partners. Don’t rush into what’s going to be your hunting partner for the next 10 years or so. Check out the breeder. Check out the parents. Check out past litters and of course decide on a breed.

I don’t often make recommendations, but if you decide on a chessie, give Ches-Shores Kennels a call at 410-827-7967 or email chessshores@erols.com, tell them “Tugboats” dad said to call. If you need a guide service to get you over the hurdles of hunting the Atlantic Coast, give me call.