There are more Greater Snow Geese on the Delmarva Peninsula than anywhere else in the country. In fact, there is a severe overpopulation problem. Snowgeese are devastating both their summer and winter feeding grounds. The hunting season runs from early November well into March. There is a 15 goose limit, and they are not bullet proof!

But, there is a problem! Actually, there are a couple problems. Contrary to rumors, Snow Geese are intelligent and very wary. Their habits make them the single most difficult waterfowl to hunt. They often travel in flocks of thousands and will seldom decoy to spreads that have less decoys than their flock. Much of the Delmarva Peninsula seaside consists of National Wildlife Refuges, and this is where they spend their nights. Much of the inland area is farmland, and this is where they spend their days. Hunting is not allowed on the refuges. There are so many fields and the Snow Geese are so unpredictable that it is difficult, at best, to determine the area they are going to use, let alone the exact field.

In the northern part of the Peninsula (Delaware and Maryland) Snow Geese are primarily hunted in fields. This is typically done by scouting the fields the day before, and then deploying hundreds of Snow Geese "rags". The addition of silhouettes, shells, and kites helps make the spread look more realistic, but there are some problems with this method. First, you must have permission to hunt the fields you plan to use. Next, you must depend on the flock returning to the same field, and this is by no means a sure thing.

Also, weather conditions such as wind, fog, rain, or unusually warm or cold days will change their flight pattern. A developing problem has made hunting even more difficult. This being more and more older birds in the flocks. They know too much, and won't decoy to "rags". Moving hundreds of shells and/or full body decoys on a daily basis is impractical, which caused many guides, in the northern portion, to cancel their hunts last year. As the bird population increases and the birds become more educated, this situation is bound to get worse.

Further South, on Virginia's lower eastern shore, the tactics are different and the results were somewhat more constant, although not without some problems. The guides in and around the Chincoteague area are experiencing excellent Snow Goose hunting under normal weather conditions. There are several differences in the way the geese are hunted on the southern end. Most guides hunt the marsh rather than the fields. Virginia does not require the decoys to be taken in every night, so most spreads are seldom moved. In years past the old time guides used diapers, rags, and even spread newspapers out on the marsh with great success. Unfortunately the birds in the south have long since wised up to these tactics.

Snows have been targeted in the Virginia area for years. Chincoteague is listed in many publications as the wintering grounds for the Greater Snow Goose. While Maryland was hunting Canadas, the Snow Geese in Virginia were steadily learning that they were ill advised to land on a bunch of newspapers. In those years Snow Geese got the reputation of being stupid birds. As it turns out the Snowgeese figured it out and the Canadas didn't. In the north, when the Canada season closed and goose hunters redirected their attention toward snows, the geese went through the same learning curve as did the birds to the south. In the southern portions it is necessary to use shells or full body decoys. Snowgeese will often spend the night in these spreads. Rags and socks will get you a lot of looks, but the birds will seldom come within 100 yards of a hunter.

The down side to hunting the marsh is that on the "Good Days" there are nowhere near the number of kills as in field hunting. When that cloud of birds lands in a field a hunter is often able to kill a bird or two with each shot and cripple a few more. With marsh hunting, you are dealing with much smaller flocks. It takes an average of ten shots per goose, and that's with geese within 25 to 50 yards of the hunter. When Canada goose hunters arrive and are told this they just shake their heads in disbelief. After taking ten shots per goose, they also leave shaking their heads in disbelief.

The only thing Snow Geese have in common with Canada geese are that they are both geese. In the marsh we are typically dealing with flocks of 30 birds or less. Canadas come in noisy, snows come in quiet. Canadas land in a fast, organized group. When the shooting starts it takes them a few moments to change their flight plan. Snows come in slowly, constantly shifting, sliding over one another as they examine their landing area. This makes it very difficult to "pick your bird", and often frustrated hunters stand up and just flock shoot. This landing procedure often is repeated three or four times before the birds actually touch down. They pitch in, drift away, then lock up and try again. Very often when they drift away they don't return, leaving hunters debating with themselves whether or not they should have shot.

When you do shoot, you usually get one clean shot and two more desperation shots. With the exception of a turkey, you have never seen something so big leave so fast. Snow Geese are nearly invisible in the winter sky. They travel in a string, and if they are coming at you, the only thing you see is the lead bird. It can easily be confused with many seagulls in the area. Although the clouds of Snow Geese also exist on the Lower Eastern Shore, the guides target the breakaway flocks, those birds that leave late and return early. Success in hunting these smaller groups improves later in the season. During mid-January through February more and more small groups form and leave the main flock, especially the older birds. Some of the older Snow Geese are as large as a typical Canada Goose. 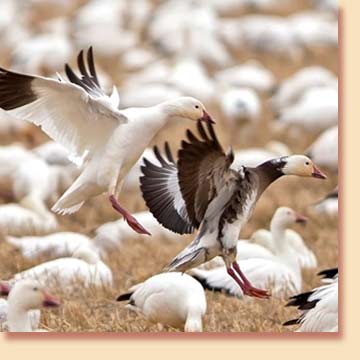 Marsh hunting is also more consistent than field hunting. Chincoteague Hunting/Fishing Cntr. guided hunting parties every day of Snow Goose season last year and saw geese every day but one. A typical day's hunt affords the hunter with one to three opportunities with birds in range. This usually results in one to three birds killed. Severe weather can improve the opportunities, but we have not come up with anything to improve the shooting.

The flavor of Snow Geese, as with other waterfowl, depends on what they are eating. Through most of the season they are eating corn, soybeans, and winter wheat. This diet makes them excellent table fare. If we experience a hard freeze the geese feed in the salt marsh on marsh grass roots. When this happens the chef needs to be more creative when preparing dinner.

Some advise for Snow Goose hunting Virginia's saltwater marsh: Camo is very important, including face camo. You need to hunt in an upright position (forget about laying out in the middle of the spread). You need to be able to scan the horizon for geese, and watch them as they circle the spread. Calling works, but leave it alone as soon as the birds pick up the spread. Flagging also can work, but should only be used when birds are way out. As soon as the snows start moving in your direction stay down, cover up, and keep quiet. Pick your bird before you standup and don't forget to lead your bird. Snow Geese appear to be standing still as they hover over the spread, but if they weren't moving they would fall out of the air. Steel shot is not recommended. You will do much better with Hevi-shot #1 or #2 shot. Stay away from the large shot sizes. Hevi-shot will kill a Snow Goose out to 100 yards, but you still have to hit it and nobody I have seen can.

Canada Geese often fly at night on the full moon, but Snow Geese will fly in any weather conditions, including pitch-black, rainy nights. Snow Geese migrate with the wind. A cold north wind can push thousands of birds, hundreds of miles south in a day. A warm southerly wind can have the reverse effect. If you add a twenty knot wind to a forty mile per hour bird, you get some idea how things can change in ten hours. Their normal flight usually takes place between 8 and 10 a.m. The return flight takes place around sunset. Under normal weather conditions, the best hunting usually takes place with the evening flight. Cold, wind and fog can all help the hunting. A hard freeze can cause the Snow Geese to stay in the marsh all day, during those conditions we have shot over two box's of shells per hunter. Rain is the worse weather for Snow Goose hunting. Once the fields are flooded, the geese are no longer required to return to the refuge to drink, so very often they will not fly at all in the evening. A prolonged hard freeze can push the birds further south in search of open water.

Those hunters expecting to drive up to a large pitblind, have breakfast served in the blind and limit out by 10 a.m. are sure to be disappointed. Marsh hunting requires boat transportation to and from the blind. We arrive at the blind before sun up, break for lunch then return and hunt till last light. As mentioned earlier, one to three geese are a good days kill and although we have had days with many more, it is not typical. We encourage hunters to join us that judge their hunt by the overall experience, not just by the amount of birds killed.